5G is fast. In fact, for many people, it’s faster than their Wi-Fi at home or work.

So, naturally, a lot of people are asking, “will 5G replace wifi?”.

The short answer? No. You’ll use both, and you’ll probably have to buy new devices to do it. Read on to find out why.

5G is the next generation mobile network (also known as a ‘cellular network’). Like 4G before it, 5G lets people connect to the internet when they’re out and about, using a phone or other mobile device.

5G can theoretically support speeds of up to 10Gbps. That’s 67 times faster than 4G’s maximum theoretical speed of 150Mbps.

You probably can’t use 5G yet

Although there’s been a lot of talk about 5G recently, the reality is, you probably can’t use it yet.

There are two reasons for this:

You will soon, though

5G is definitely the mobile network of the future.

Small, populous, technologically advanced countries will obviously get it first. In South Korea, for example, the 5G future has already arrived. They announced the deployment of a nationwide 5G network in April 2019, and have more than 7 million devices connected to it already. In other words, about 10% of all of South Korea’s mobile devices are already using 5G. And that number is expected to be 90% by 2026.

As you can see in the graph below, from TechCrunch, 4G is still king, globally, but 5G is quickly catching up: 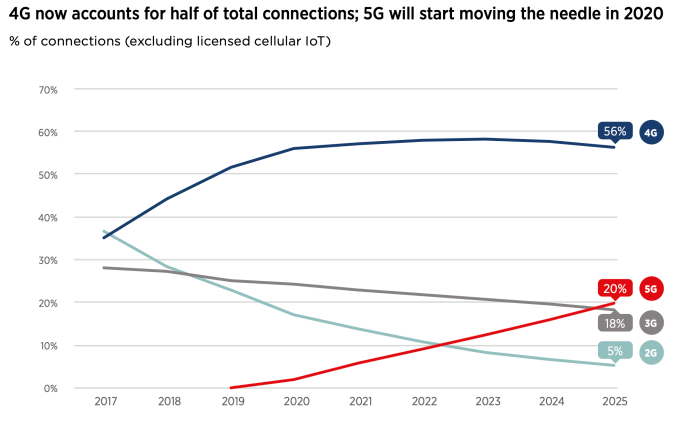 But you’ll still use Wi-Fi too

Your devices will automatically switch between the two, as you move about, just as they do now.

Why will you continue to use both? A few reasons…

5G phone plans – like 4G plans – have download limits. Most home and work broadband internet plans, on the other hand, allow unlimited downloads.

This means you won’t be able to download anywhere near as much on 5G as you can on Wi-Fi. (Well, technically, you can, but you’ll pay a LOT more for it, because you’ll pay penalties for exceeding your download limit.)

Although 5G can theoretically support speeds of up to 10Gbps, most people won’t ever see those speeds. Not even close.

(If you need any convincing on this point, think about what speeds you get now on 4G. Theoretically, 4G supports speeds of up to 150Mbps, and up to 300Mbps if you’re on 4G LTE Advanced. But do you get anything like those speeds?)

In practice, it’s far more likely you’ll see speeds of somewhere between 50Mbps and 500Mbps on 5G. For example, here’s a recent US 5G vs 4G speed comparison from Tom’s Guide:

Obviously this is still very fast, but is it faster than what Wi-Fi is capable of? No.

That’s about the same as typical Wi-Fi, now

Wi-Fi 5 (the version of Wi-Fi that most devices currently use) can theoretically support speeds of up to 3.5Gbps. But most people don’t see anywhere near those speeds.

For example, AT&T’s fastest fiber broadband maxes out at 1Gbps. So if you’re with AT&T, you can’t get more than 1Gbps on Wi-Fi.

Plus your speed will drop dramatically as you move away from your router. That’s because phones and laptops have a very limited Wi-Fi range. This PC Mag graph illustrates it perfectly:

As you can see, speeds drop off very quickly. Once you’re 50 feet away from your router, your speeds will have halved.

So if you started with 143.28Mbps, you’ll have only around 70Mbps once you start moving around your home or office.

And that’s using the fastest band (5GHz) without any walls in between you and the router. On the slower band (2.4GHz) and with walls between the router and your phone, your connection will be even slower: probably around 30Mbps.

So, depending on your distance from the router and the amount of interference, Wi-Fi delivers real-world speeds of between about 30Mbps and around 140Mbps. Again, that puts it in much the same ballpark as real-life 5G with most US carriers (which is about 50-60Mbps).

But Wi-Fi is getting a lot faster

This is where things get really interesting.

Fixed broadband is going to continue getting faster. 10Gbps internet (aka ‘10G’) is just around the corner in the US. And Wi-Fi 6 has already been released. (Wi-Fi 6 is theoretically capable of speeds of up to 9.6Gbps, it has a better range in some situations and it’s better at handling lots of device connections.)

In other words, before too long, you may have 10Gbps broadband to your home or office, and be connected to it with Wi-Fi 6. So your Wi-Fi will be capable of delivering theoretical speeds of up to nearly 10Gbps.

And that’s exactly the same as 5G’s theoretical top speed!

Of course, as always, the word ‘theoretical’ is important here. Your speeds will vary when using future Wi-Fi, and it’s pretty unlikely you’ll ever get close to your theoretical maximum.

In real life, if you’re connected to a 10Gbps fixed broadband connection via Wi-Fi 6, you’re more likely to get speeds of around half the theoretical maximum. But that’s still about 5Gbps, which is about 100 times faster than the speeds most US customers are now getting on 5G!

So that’s the long and the short of it. 5G is fast, but not really any faster than current Wi-Fi, and nowhere near as fast as future Wi-Fi.

So – once you have devices that can handle 5G – you’ll use both it and Wi-Fi, just as you use 4G and Wi-Fi now.

Check if 5G is available to you already

Here’s a map from GSMA showing which countries have 5G and which don’t:

As mentioned above, to take advantage of the superior speeds of 5G and Wi-Fi 6, you’ll need a device that’s compatible with both.

Check out the deals below to grab a bargain now. (Just be sure to check that the device supports the 5G band used in your country.)

What do you think?

Please comment below to let us know your thoughts on the 5G vs Wi-Fi issue.

View all of Glenn Murray's posts.

How To Use Public Wi-Fi Safely