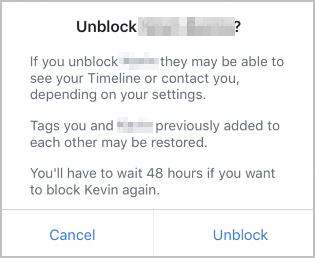 Unblocking people on Facebook can be done in less than one minute, if you know where to find the unblock settings. While in this post you’ll find it as easy as pie to unblock someone on Facebook, with the picture tutorial below.

Something you may want to know

Facebook supports blocking and unblocking. So if you unblock people, that person may be able to see your Timeline or contact you depending on your settings.

You’ll need to repeat if you want to unblock more than one persons.

How to unblock people on Facebook in iOS devices

If you’re using iPhone or iPad, you can try these steps to unblock people in Facebook:

How to unblock people on Facebook in Android devices

Unblocking someone in Android devices is slightly different than that in iOS devices.

Here’s what you need to do:

Tadah, now you should know how to unblock someone in Facebook quickly and easily.

If you have any questions or suggestions, feel free to leave a comment below.

Lillian, a Microsoft Certified Professional (MCP), is a technology enthusiast, longing to share the technical tips and solutions to computer problems. Also as a person who enjoys writing, she’s found the perfect match for writing and technology. When she’s not writing, you’ll find her either reading or playing mobile games.

View all of Lillian Lai's posts.

How to Find Someone’s Social Media by Phone Number (2022)